A powerful file manager for the GNOME desktop environment

The Gnome Commander team is proud to announce the release of Gnome Commander v1.6.0. The new version comes with a number of new features and bugfixes after nearly 690 commits.

The maintainer would like to thank all the people who contributed to this release, especially to Dmitry, Martin and Eric. A big ‘Thank you!’ goes also to the translators, especially the ones from the Gnome translation teams. You did a great job in the past months!

Below you will find a list of all changes and a closer look at some of the new features.

The ‘Send files’ command is now configurable in the Programs tab of the Gnome Commander options. The default value is set to nautilus-sendto %s. 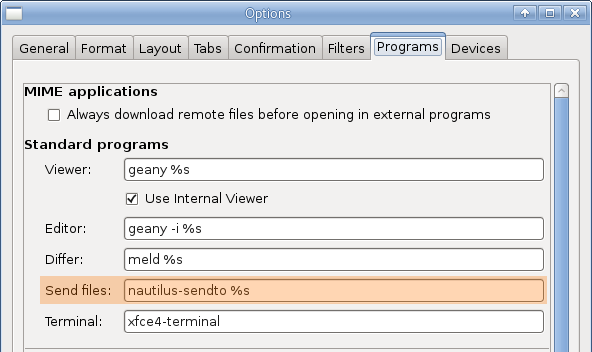 Personally, I like to send my mail via mutt, so my preferred send-to command is
gnome-terminal -e "mutt -a %s". Have fun to add your own cool command.

When you right click on a part of the directory indicator, the path up to the position of the mouse cursor is copied.

In the example above, /home/uwe/Programmieren/Projekte can be pasted from the clipboard after right-clicking.

The user action ‘Display main menu’ is a now available at the Settings->Keyboard Shortcuts tab:

The shortcut is initially set to F12 but you can choose your own hotkey, too. Hint: Its fancy to start GCMD without any disruptive menu widgets. Just try it out and have even more space for your file panes, yeah!

Now you can extend the file context menu even more easily then before. Here is an example with four additional entries: 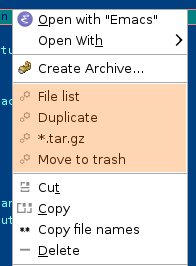 How does it work?

Display of application icons in the ‘Open With’ popup menu

In the past it wasn’t possible to see the application icons in the ‘Open With’ section of the popup menu. Now, this is possible. Again, an example picture is worth a thousand words:

Usage of strftime patterns in the File Roller plugin

In the configuration dialog of the File Roller plugin it is possible now to set a global filename prefix pattern for newly created archives. Replacement of strftime strings is supported, which is convenient when you periodically create archives and want their filenames to contain the current date. In the figure below a screenshot of the File Roller plugin options is shown with an example of the current year, month and date in the filename.

Usage of dconf instead of gnome-config

When you boot GCMD v1.6.0 the first time now, all the settings in these files are automatically transfered into your local dconf database, the configuration system of GNOME 3. The config files in ~/.gnome2/ are then renamed to ~/.gnome2/xxx.deprecated. You can delete them safely when you feel everything went fine.

All GCMD options can be graphically displayed and set in the dconf-editor (see the image below) at the path org.gnome.gnome-commander. Changing a setting there will have immediate effect in a running GCMD session for most of these options. Of course, changing settings from inside GCMD will still work. 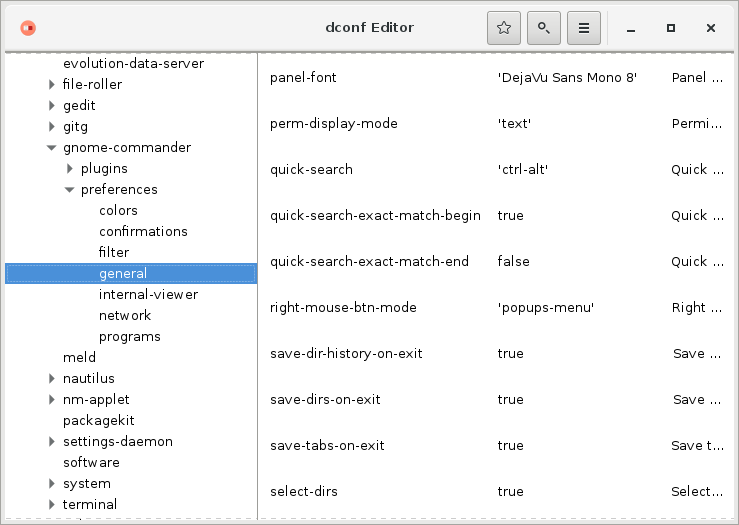 There exists also an xml-config file in ~/.gnome-commander/gnome-commander.xml. Options stored there are not affected by the update in any way.

Usage of gkeyfile for devices and favourite apps


To top of page